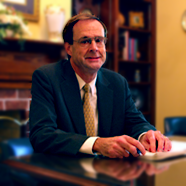 John C. Thomas was born and raised in Conway, and graduated from Conway High School in 1975. He then attended Coastal Carolina University and graduated in 1979 with a B.A degree, an M.A. degree in History from the University of South Carolina in 1983, and a Juris Doctor degree from the University of South Carolina School of Law in 1985. He was licensed to practice law on May 21, 1986. John was a law clerk for the Honorable Sidney T. Floyd, Circuit Court Judge, during 1986-87. He then worked for the McCutcheon, McCutcheon & Baxter law firm until 1990, at which time he opened his own office in Myrtle Beach. In 1992, John moved his law office to Conway, and has been at his present location since 2004.

John is a member of the South Carolina Bar and the Horry County Bar Association, and has practiced for over twenty years in the Probate Court. He has served on the Horry County Probate Court Advisory Committee. He is also a member of First Baptist Church Conway, the Conway Lions Club, and the Horry County Historical Society. He was recognized by his peers for inclusion in Super Lawyers, in its Estate Planning & Probate section, for the years 2013, 2014 and 2015. John and his wife Sandy have been married for over 27 years and reside in Conway.